http://www.jarte.com/store.html
Jarte – Better Than Word pad
I don’t know how everyone else is writing their posts, I don’t get to sit behind them and see what program they’re using. I didn’t like Office, and Open Office, the free program was just as much a pain, as the Microsoft program was. I never liked notepad, as it always wrapped the sentences. So for years I have used Word pad, which is a great program, except…..

Word pad has great features, and is a well written program, utilizing an engine that functions extremely well. It is versatile and always reminds me when I need to save my work. My only complaint with Word pad is it didn’t come with a spell- check feature, and that will be it’s downfall!

When I want a document for purposes other than a post for this site, I would have to pretend I was creating a new post, so I could edit the document, as this site has a spell-check function, and lets me know when the wording is not right. Word pad doesn’t have those features. Apparently Word pad doesn’t have many features other document editing programs have, so I have changed to a new program!
http://www.jarte.com/?so=j&ed=s&ve=53

“It’s one of life’s little ironies that in a country with free speech, a program called Word costs over a hundred dollars. Fortunately, we also have Carolina Road Software and their free-of-charge word processor, Jarte.”
—PC World magazine

The Jarte word processor relieves that problem by including only the features likely to be needed by real people. Jarte is designed for students, writers, small business people, and home users. But what really makes Jarte special is the unique way it makes the features that are included easily accessible.

You expect a word processor to be able to handle Word documents, font and paragraph formatting, spell checking, print preview, and more. While Jarte performs all the standard functions well, the most important aspect of Jarte is the numerous small details that make it an efficient and enjoyable tool for creating documents. Small details like: 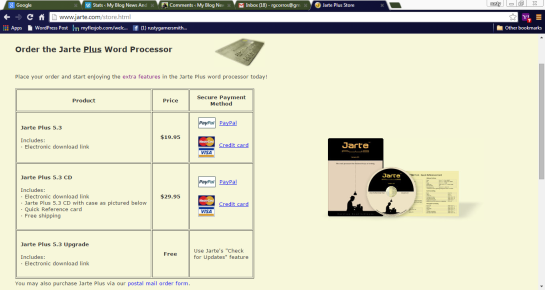 Tabbed document windows for easy access to your open documents
Larger buttons for the most commonly used functions
Instant dictionary and thesaurus word lookup (integrates with free WordWeb)
Spell check and text search tools that do not park themselves on top of the text you are trying to edit
Single click bookmarking that make bookmarks both useful and usable
Instant access to the documents and folders you designate as your favorites
Instant access to the fonts you designate as your favorites
Use of the mouse scroll wheel button to copy and paste text
It is Jarte’s thoughtful details that will leave you wondering how you lived with that cumbersome office word processor for so long.

Take it With You!

Jarte may be the best word processor available for mobile PCs. Jarte takes up very little space on your SSD or hard drive, it runs quickly and efficiently, and Jarte’s compact display is perfect for small screen PCs. Jarte supports touch screen gestures, such as finger swipe scrolling and pinch zoom, for use on tablet PCs such as Microsoft’s Surface Pro. Jarte is an ideal word processor for mobile PCs!

At the heart of Jarte sits the same word processing engine used by Windows’ WordPad. The difference is that Jarte builds far more capability around the WordPad editing engine than the WordPad program itself does. The significance of this fact is that Jarte users are secure in the knowledge that Jarte is making use of the same reliable, time tested editing engine used by millions of other Windows users all over the world. If you have tried other alternative word processors and found them to be unstable that may be in part due to their use of unreliable, home grown editing engines.

Jarte is a Free Word Processor? What’s the Catch?

Yes, Jarte is completely free. There are no ads, no trial period, no nag screens, and no crippling of essential features. We do sell a separate edition of Jarte called Jarte Plus for those who want more. Many of Jarte’s regular users have been more than willing to pay the small price for the extra bells and whistles provided by Jarte Plus.

Whether or not you choose to upgrade to Jarte Plus, we hope you will go forth and free other weary souls from their corporate office word processors by introducing them to Jarte —the word processor for the rest of us.3/20/2015