Nine Passes / Fly Fishing through the Past and Present of the High Sierra
Author: TODD BRUCE 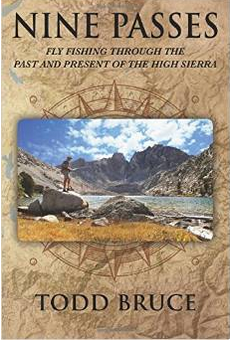 This book is a well written narration of a history involving an adventure, between the past and the present. If a reader judges a book by a title, then a non-fishing individual would probably pass on this book, and miss out on an actual history. This book is not guide to fishing, but a tale of a life long dream to retrace a past long gone by.

The history is three-fold in dimension, as it is a tale of a treasure discovered in grandma’s bookshelf. The author’s family hiked the trails of the Sierra Nevada mountains, following the John Muir Trail, when the author ” Todd Bruce ” was a child.

Todd had in turn found a book, given to his grandfather, George R Goldman, with an inscription written by a man named Les in the 1940’s. That book, a family treasure was read, and re-read by Todd while he was growing up. Todd’s family were avid hikers, campers and outdoor enthusiasts, who spent many vacations following the John Muir Trail.
That book was titled ” Waters of the Golden Trout Country “, written by a man named Charles “Mac” McDermand. Todd had learned fly fishing from an early age, and had honed his skill fly fishing on those hikes. That book inspired Todd to follow the routes “Mac” had followed, and to see if the lakes and streams, described in that book, were as they had once been.

That dream to retrace “Mac’s” adventures took many years to come to fruition. Todd had grown up, married, and raised a family, before he was able to actually follow his dream. This book describes his jubilation, rediscovering not only Mac’s past, but his own, as he discovered he had camped at some of the same locations he had read about, as a child.

Never having fly fished myself, I was intrigued with this adventure. The author describes the trails, and scenic wonders of the High Sierra Mountains, and the John Muir Trail in detail. He followed his childhood dream over a 5 week period, hiking a 300 mile trek, remembering not only his childhood, but revisiting the places he had read about, so many years ago.

The author, Todd Bruce, studied the region, flora and fauna extensively, over his lifetime and brings all of that knowledge to us in this book. The photographs and maps are stunning, and in many cases, Todd has also included photos from his treasured, ” Waters of the Golden Trout Country ”

I highly recommend this book to all, whether you are a fishing nut, history buff, or interested in hiking the High Sierra Mountains, and following the famous John Muir Trail. As an experienced back packer, I look forward to visiting the locations described by Todd, and even find myself interested in trying my hand at fly fishing in those remote lakes and streams of the High Sierra Mountains, along the John Muir Trail.

This book is available at AmazonBooks.com in Kindle form and paperback