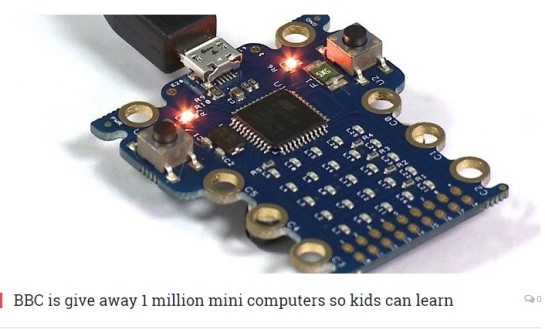 BBC is giving away 1 million mini computers so kids can learn to code – LONDON — The BBC wants coding to become as fundamental as writing, and is taking some very practical steps to ensure that happens.

The broadcaster announced on Thursday that it is giving away 1 million micro computers to next year’s cohort of 11- and 12-year-old schoolchildren in Year 7, as part of a new initiative called Make it Digital.

Currently in development, the Micro Bit is a small piece of programmable, wearable hardware that helps kids learn basic coding and programming.

It could act as a springboard for more advanced coding on products, such as the single-board computer Raspberry Pi, according to the BBC. Children will be able to plug the device into a computer, and start creating with it immediately.

“BBC Make it Digital could help digital creativity become as familiar and fundamental as writing, and I’m truly excited by what Britain, and future great Britons, can achieve,” BBC director general Tony Hall said in a statement Thursday.

The broadcaster also announced it is partnering with 50 organisations, including Google, Google, Samsung, Samsungfor Good and Code Club, and will host a range of educational events and activities.