Capturing the Night in Digital Photos,

VINCENT LAFORET remembers the moment he realized that digital cameras had surpassed the human eye. It was late in 2009, and Mr. Laforet, a photographer who worked for The New York Times for many years, was shooting in Los Angeles with the EOS 1D Mark IV, a Canon camera that he had gotten as an early prototype.

“It was at night, and I remember pointing this camera into a dark bush. It was pitch black — my eyes saw just pure black,” he said. “But on the LCD screen of the camera, I saw green leaves and little red cherries.” The moment was a revelation, he said. “I was seeing stuff that I could not see with my eye, and I knew that we were entering a new age of photography.”

I used to live in the San Francisco Bay Area, and just seeing these photos of old home, ……

My friend Ron Fleishman sent me a couple more pieces of his artwork.  I really thought the psychedelic art was great, but this ” Black and White ” is beautiful. Hope y’all like it as much as I do.

When we saw this photo for the first time on 500px, it was an instant favorite that we immediately added to Editors’ Choice. Since then, photographer Luca Gerda László has been inundated with requests to share the secret behind her glow in the dark mason jars. Lucky for you, the big secret is about to unravel…

Glow in the dark mason jars

The image above is one of my “most famous” photos and I got lots of requests on how I made these glowing jars. I decided to do a step-by-step tutorial for you and I hope that it will help you to achieve a similar result.

I have a lot of mason jars. Small ones and bigger ones, but I think big jars look more cute and magical. Big jars also take a lot of time to paint, it took me about 5-6 hours to paint the jar in the middle of the photo. Be careful with the paint, it is waterproof, so after it dries you may not be able to remove it from your clothes and furniture. Also, be sure to wash your brush right away after using this paint. 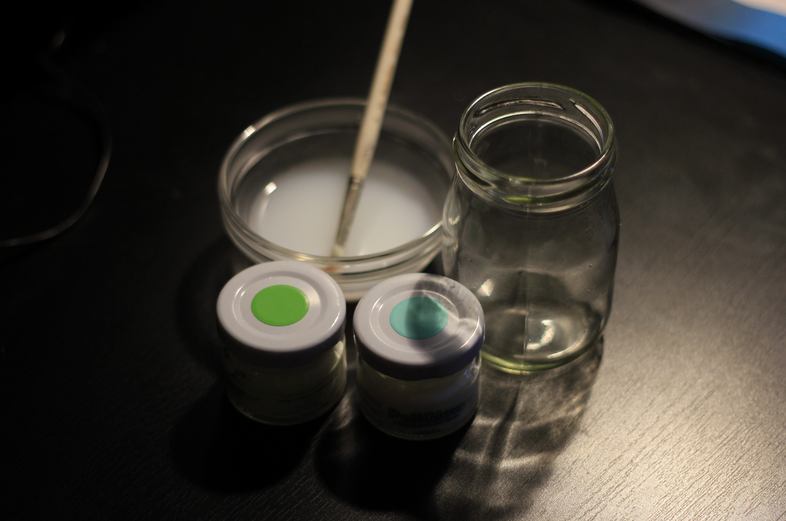 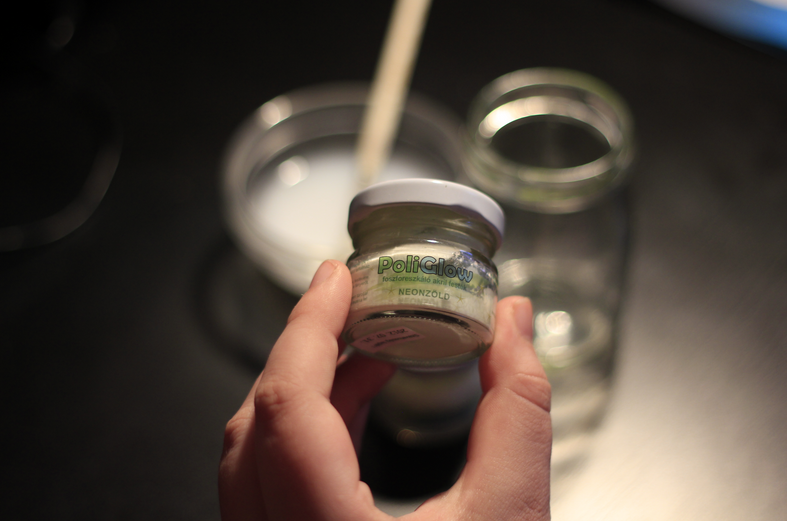 Glow sticks: Instead of glow in the dark paint try using glow sticks. Buy glow sticks online or in your local dollar store, cut into the sticks and splash the fluid all over the jars. Be careful not to stain yourself or the surrounding area. The glow in the dark effect will last only for a few hours.

Mason jar alternatives: If you don’t have mason jars available use clear glass or see through plastic cups.

2. Mix the paint with your brush until the glowing particles have dissolved evenly.

3. Make tiny dots in the inside of the jar. The more dots you make, the prettier the jar will look.

4. Dot on one colour first, then the next, etc.

It is this easy. In daylight your jar won’t look that fancy, but at night it will make your room beautiful and cozy. Charge it with a lamp or with daylight and take it to a dark place to photograph! 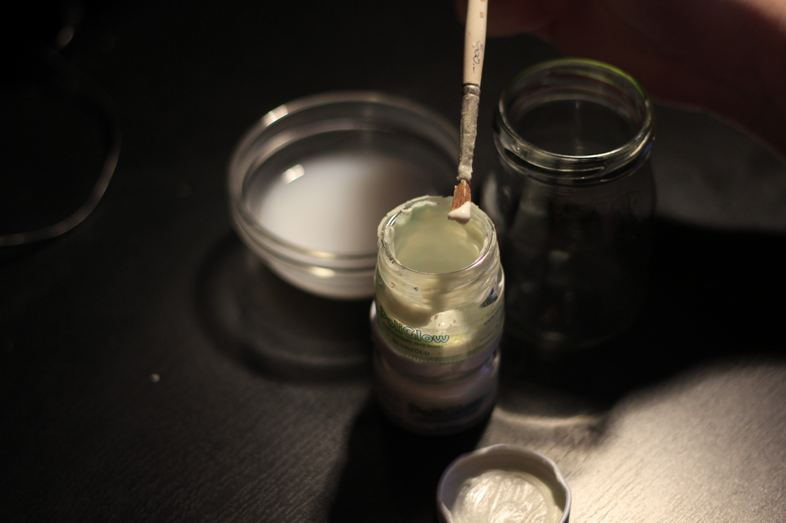 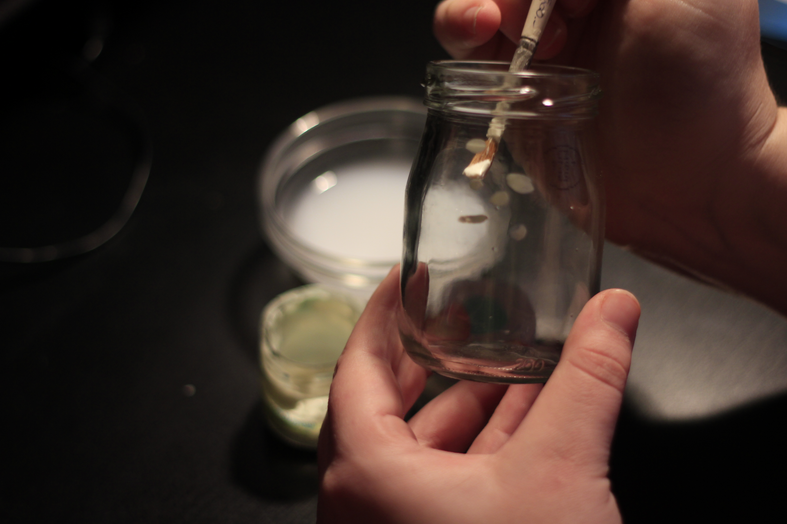 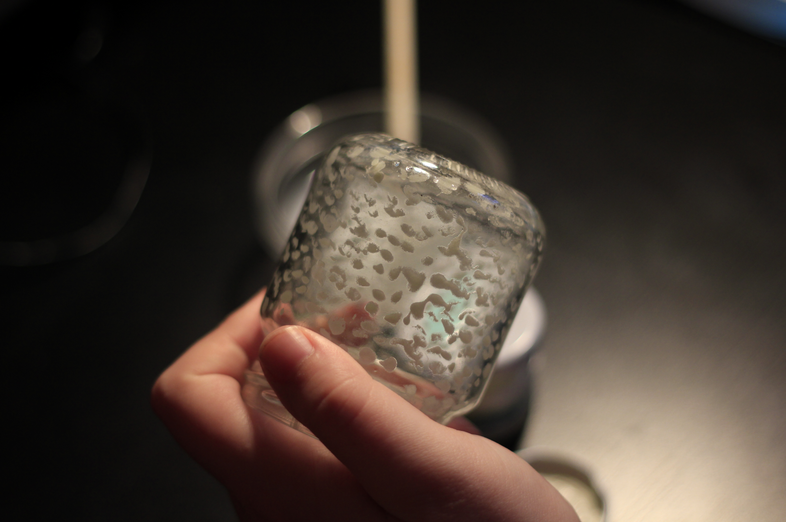 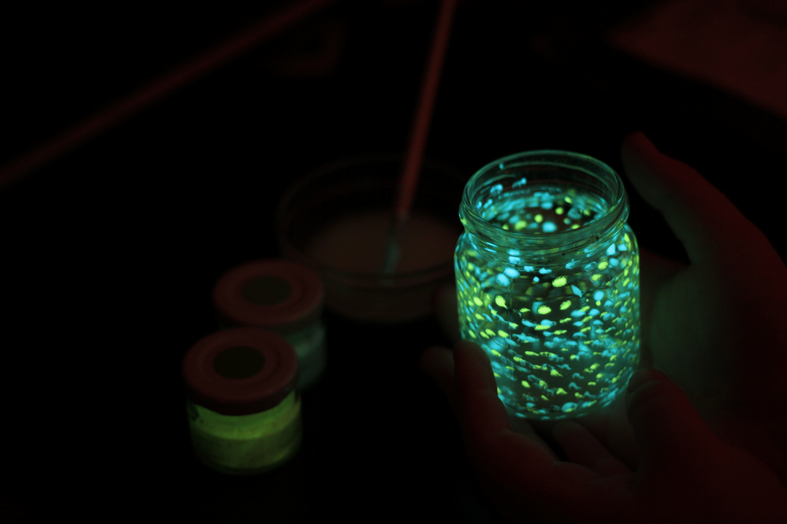 Thanks to Lucy for sharing this tutorial and thank you for reading! Looking for more tutorials? Check out previously featured “Coffee With Milk” article, revealing some tips & tricks behind splash photography.

Do you want share your skills and educate those new to photography? If you have a tutorial you’d like to share — be it in shooting, post-production, or top tips for getting your work out there — please get in touch with our Editor at dl@500px.com!

This is one of the emails that was in my in-box. It is not the whole thing. At present, my reader is crammed with, this sites re-blogs, and I can’t even get to all of my followers work.  Can someone give me some insight?  Is it right to load a site with only others work? Isn’t that another form of spamming?  Come on people, let me know what you think.  Like I said, this was just an email, and look at the length of it!  I’m thinking I should post some nasty photos to get his ass in trouble.  Let me know, PLEASE.

Hey y’all, I took an Express ride through the better parts of Cyberville yesterday. The ride was great! I saw the shabbier places of the web along the way, but my driver assured me, we would only be passing by the ghetto area. My place is just outside the lowest place on the web tour.

When we made it through the vast area that made tent cities look pretty, we hit ” Downtown” Cyberville. That was a sight, tall sleekly designed places, some so tall I couldn’t even see their tops, above the cloud. I could only gain admittance to a couple of these fancy places, and I kind of had to push my way in.

It seems there is a dress code, and prior to entry I had to find a cover that didn’t look too shabby. There were a few places I wasn’t invited into, but I did manage to sneak into a place that was truly clean and nice.

I was a little worried running around someone’s place without them there. I felt like a rodent, scurrying about, hoping I didn’t leave any tell-tale clues I had been there. I’m not kidding, this place was so nice, I was almost afraid to click any buttons lest I managed to leave a smudge or drop a chunk of lint somewhere!

It turned out the owner of that place is a photographer. His place was probably being monitored, with cameras and whatever other types of surveillance gizmos high-class folks use. I don’t use anything like that. If my dog doesn’t like you, he’ll let everyone know it, but I don’t keep watch, and never lock anything up.

The walls were lined with this artists work, and there were hundreds of faces, staring back at me. They didn’t say anything, but I could tell they didn’t want me there. They seemed to disapprove of me being there, without a proper invitation. I tried to ignore them, but their faces were too compelling to even shut out of my sight.

I quietly crept around gawking at all of the great photos and wished I had that kind of talent. I was mildly surprised no one came in to see who I was, or what I wanted. That only made me feel more like a thief, not being invited in, and looking like a lower life form. I really was surprised! Like I said, this place was better than a museum.

I scribbled down the address on a piece of scrap paper, i found in one of my pockets, just in case I wanted to go back. I haven’t heard from any legal types, so I must have managed to stay below the radar. I guess I am a creep, as that was what I did there. Creep around, don’t disturb anything, and wipe off all of the surfaces I might have touched.

Anyway, I figured some of you good, clean, talented and adventurous people may want to see this place. Here is the address I wrote down at the bottom of this post, and you can see it for yourselves. If he says anything about my having been there, just act like you don’t know me, or never heard of me. That might work, unless he can see the lie on your face.

Just a word of caution though. I think he’s a card player, and can read you like a book. Just act calm and normal, and don’t let him see you are hiding anything, because he can read everyone’s expressions. I gotta go, so y’all have a nice time touring the place I told ya about.
http://joshidaniel.com

Our first post highlighting rare photos was quite successful (1,300 views). Now you can travel back in time again with our second installment of interesting historical photos. Enjoy!

During the Apollo 16 mission, Charles Duke left a family photo on the moon that was enclosed in a plastic bag.

Vought F4U Corsair crashes on the deck of a carrier when the arresting gear failed. Most likely sometime during WW2 in the Pacific Theater.

The following photo is believed to be the last photo ever taken of the RMS Titanic before it sunk in April 1912.

1884 De Dion, Bouton et Trepardou Dos-à-Dos is the oldest running car on the planet. It was the first car to participate in an automobile race.

This photo was taken in space right after World War II (1946). A team of soldiers and scientists used a German-made V-2 missile equipped with a camera to capture this shot. Making it the first photo in space.

Hitler inspecting the massive 800mm “Schwerer Gustav” railway gun from afar. It was the largest-calibre rifled weapon ever used in combat, and fired the heaviest shells of any artillery piece.

George S. Patton‘s Dog, Willie, mourning his best friend on the day of his death.

Joseph Goebbels on his wedding day. Hitler was his best man and can be seen behind him in a trench coat and top hat.

George Armstrong Custer and some of his fellow soldiers, during the American Civil War.

An RAF pilot getting a haircut while reading a book between missions.

Manfred von Richthofen, aka “The Red Baron”, petting his dog on an airfield.

Soviet soldiers stop for a break in 1945 on the outskirts of Berlin.

Tsar Nicholas II goofing around with his friend in 1899.

Walt and Roy O. Disney on the day that they opened the Disney studio. Beside them are their wives and mother.

John Young and Charles Duke training for the Apollo 16 mission in the New Mexico desert.

Have you ever taken a photo and found the picture contained more than you were trying to capture? Here are 10 photographs that will surprise you, and maybe make you go through your snapshots to see if you missed anything.
Brace yourselves for the unexpected!  By the way, stick around and keep watching.  Just click on the stories you want to watch.  It never stops.  Grab a cup of coffee and enjoy.
10 most mysterious photos

Hope you found this interesting, as there will be more to come.