Hey y’all. I found another interesting article, and I’m going to pass it on to you. This article sounds more like what we all would expect from new tech, and tells us of some of the problems we might expect.

A Mozambican poaching kingpin has two reporters arrested and threatened with torture and death.
February 23, 2015 By John R. Platt

Two international journalists who traveled to Mozambique last week to investigate rhino poaching instead found themselves arrested and threatened with torture, rape, and death.

“We were almost certain we were not going to survive,” said Swedish photojournalist Torbjörn Selander, who is in Mozambique with German reporter Bartholomäus Grill on assignment for Der Spiegel magazine.

The reporters went to the village of Mavodze on Feb. 16, hoping to interview a local kingpin who is said to control at least 10 teams of poachers in the region and is wanted by Interpol on suspicion of murder in South Africa. “Other journalists have met the kingpin, but I think someone has put pressure on them, and they are quite nervous now,” Selander said.

Just two days before the journalists arrived in Mavodze, the government of Mozambique pledged to take immediate action to eliminate illegal rhino poaching and trade in rhino horns. It is not known if this influenced the situation last week. The embassy of Mozambique did not respond to requests for comment for this article. 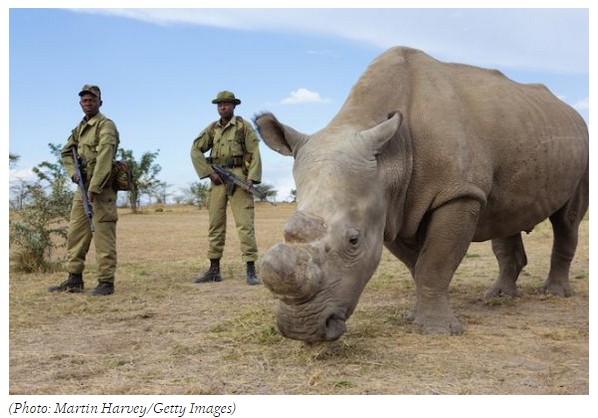 Now is the time to invest in real geothermal energy

Thousands of drilling rigs are idle. Why not put laid-off roustabouts to work drilling for renewable energy?
By: Lloyd Alter
http://badge.stumbleupon.com/badge/embed/2/?url=http%3A%2F%2Fwww.mnn.com%2Fearth-matters%2Fenergy%2Fstories%2Fnow-is-the-time-to-invest-in-real-geothermal-energy61Facebook69Twitter0Pinterest0Google+
12

In a recent post on ground source heat pumps, I purposely used a photo of a geothermal installation in Iceland to make the point that geothermal energy was a very different thing. Many complained that I obviously didn’t know what I was talking about (“The big clue starts with the picture at the top which is NOT a geothermal heat pump system.”) Well, duh — that was the whole point. Geothermal power is a very different thing and a very important source of renewable energy.
With true geothermal energy systems, the heat of the Earth’s interior is used to make steam, which drives turbines, just like coal or nuclear plants do. This heat is close enough to tap at geologic faults, so the hot spots are along the Pacific rim and Iceland, the geothermal capital of the world. Almost every building in Iceland is heated by hot water, and all the country’s electricity is made using geothermal steam. There is so much of it that there is talk of building a multibillion dollar submarine cable to Scotland. Meanwhile, the United States has 3,500 megawatts of installed geothermal electrical power, about 30 percent of the world’s supply. It could have a lot more.
And thanks to the drop in the price of oil, now might be a good time to drill, baby, drill for geothermal energy. According to Bloomberg, drillers are parking rigs as oil prices collapse and have laid off thousands of workers. According to Reuters, “Oil drilling in the United States will continue to fall in the first half of this year, and could even halve, according to major oil service companies looking to past slowdowns as a guide.”
North of the border in Alberta, Canada’s oil powerhouse, they are trying to put those drills and workers to work on geothermal. According to Corporate Knights, it’s a big opportunity, a silver lining for the geothermal industry. The head of the Canadian Geothermal Energy Association (CanGEA), Alison Thompson, is teaching drillers how to adapt oil technology to geothermal drilling.

“These drilling rig operators are selling their services right now at half the price,” said Thompson. “So this is a prime opportunity for us to be more cost-competitive, but to also get out-of-work people back to work.”

Tyler Hamilton of Corporate Knights notes that it’s tough to find drillers when the times are good in the oil patch; that’s where the big money is. However it’s a very different market right now.

“It’s just such a wonderful opportunity to have some cost decreases in our own industry,” Thompson said. “Now, when they find themselves out of work, we’re welcoming them with open arms.”

Tech transfer from the oil industry is actually happening in the geothermal world; Norway’s Statoil is drilling for geothermal in Iceland, and Chevron is a big player in geothermal, although it recently pulled back because, well, nothing is as profitable as oil, or at least wasn’t last year.

Geothermal energy from EGS represents a large, indigenous resource that can provide base-load electric power and heat at a level that can have a major impact on the United States, while incurring minimal environmental impacts. With a reasonable investment in R&D, EGS could provide 100 GWe or more of cost­competitive generating capacity in the next 50 years. Further, EGS provides a secure source of power for the long term that would help protect America against economic instabilities resulting from fuel price fluctuations or supply disruptions.

Stanford economist Paul Romer noted in 2004 that “a crisis is a terrible thing to waste.” The oil drilling industry and its workers are certainly having a crisis right now. Why not put them to work on the real geothermal energy right now?
Related on MNN and TreeHugger:

To find out what’s causing the blue screen / programming conflict, you’ll have to : Turn off the computer.
Press the start button and immediately press the F8 key ( several times ) until you get one of the ADVANCED BOOT MENU screens.
Follow all prompts to get to Safe-Mode.

In Safe-Mode you can check out what is in your computer in the way of programs and the processes involved with them.

Safe-Mode does not let you connect to the Internet, so I had no idea the problem I was having was with a conflict between the wireless devices. I kept trying to start my computer in different modes and removing unwanted programs and apps.

Had I really recognized what was happening when I tried to start the system, I could have saved myself tons of messing around. The trick is to turn on the system and watch the computer come to life. As each start-up program comes to life, an icon in the tray displays that it is ready and then the next one comes up. ( There may be as many as 50 or 60 processes trying to start ) I saw the Netgear program try to start, and then the blue screen, but it was one of the last programs to load up. I should have watched the start-up closely from the beginning and paid attention to what was trying to load up.

Once the conflict has been eliminated your system should act just fine again. If you’ve removed programs and decided they weren’t the problem after all, try to re-install them, but make a log on what changes you are making. That will help if the blue screen comes back! Keeping a log of the changes you make to your system and the reasons for it, can make a real difference as to how your system operates. Just as you’re always told to back up your work, meaning make back ups, you should create a log of all changes to your computer, and refer to it when something doesn’t work the way is should.

The human species is great, but its tendency to claim superiority may be its affliction. View these photos and challenge your perspective.

The human race has an affliction of assumed superiority. Apparently with the advent of fire, the Homo erectus brain swelled to a proportion that allowed the capability to learn and develop language, fiddle with technology, and form meaningful relationships with others.

What didn’t happen with this ‘so-called’ jump in evolution, however, was the capability to live from a space of compassion, commune with nature, and respect (or easily perceive) the innate force that ties all together.

While human beings continue to transcend previous levels of innovation, intellect, and comprehension in self and the ‘Spirit’ of life, as a collective their air of superiority still reins supreme.

Which is why we suggest everyone take a good, long look at the photos gathered by diply below and really size up their existence in proportion to the majesty which exists in the rest of the universe.

FIRST, LET’S START OFF WITH YOU.

AND FROM 127,852 FEET (WITH FELIX BAUMGARTNER JUMPING OUT A CAPSULE IN THE STRATOSPHERE), TAKE A GOOD LOOK…

WOW – IN COMPARISON TO THE SUN, YOU’RE TINY!

IN THE MILKY WAY GALAXY, EARTH ISN’T EVEN IN THE SCALE PHOTO.

DON’T FRET. HOW ABOUT SOME MORE CONTRAST?

THIS IS ROSETTA’S COMET. A PROBE WAS RECENTLY LANDED ON IT, AND THIS IS HOW BIG IT IS IN COMPARISON TO LOS ANGELES:

TIME FOR A SELFIE! THIS IS EARTH IN SPACE. GORGEOUS, HUH?

AND IF YOU’RE NOT VISUAL, MATH CAN BREAK IT DOWN:

AND FINALLY, THE GRAND SCHEME:

THIS IS THE MILKY WAY. IT BOASTS OVER A BILLION STARS:

…BUT WAIT. YOU STILL MATTER.

Just because the Universe is mighty, doesn’t diminish the importance of a single life or the beauty that exists on plant Earth. We’re just hoping some perspective might introduce some well-needed humility to the human race.

Hey y’all, here is another great work by my friend Ron Fleishman. Hope everyone likes it as much as I.

Beyond the Milky Way

Hey y’all, here is another pic from Ron Fleishman. Enjoy….

Hey y’all, I don’t know what is real, and what is fancy Photoshop, so you can try to figure it out for yourselves.  I hope it’s entertaining.

Like I said, you can judge for yourselves, and feel free to tell me what you think. Thanks for coming by also.

https://www.youtube.com/watch?v=FUtdE2G6_ww
Hey y’all, this is more information on survival. I’m sure most of you think you would never need to know this, but you never know what will happen next. Most of you can replicate the same results easily at home, right out of your kitchen and garage.